I really enjoy ‘journals’ in games that are gradually filled out as the main character goes on their adventure, and I thought this idea would fit well with my game idea to serve as a kind of travel log which will hopefully be another entertaining level of storytelling.

Here’s the design board I made previously which I will be using as reference and inspiration whilst making the assets. I’ll be using the same method of code variables that I used to set up the doors and obstacles in the game. So once the player has encountered something in the world a drawing will appear in the journal along with a little comment from Digby.

Also, I have been reflecting on one of my relative’s comment during testing that I should include larger more detailed images of the characters as they would like to see them closer up. I have been thinking about how to incorporate more character details and I decided that I could make a second journal page that you can flip to that shows Digby’s impression of each of the other characters as well as some drawings of them. I thought that would be quite a characterful and cute way to show more personality. I also would like to add some larger character portraits when interacting with them in dialogue, but I have yet to decide how that should be yet, if I have time to implement it.

I created two journal page backgrounds and set them up so that they would serve as a kind of pause screen, so by pressing a key you can go to the journal and then pressing the left and right keys flips between the pages and another key returns the player back to where they are in the game. At the shows, I will encourage players to keep checking the journal so see if there is new content.

Here is what the journal looks like when it is filled, I drew the images seperately and created them as objects which are created in this ‘room’ when the player reaches certain landmarks. I like how it looks so far, I just want to add some little notes around the images to give the players a little more insight into Digby’s thoughts.

And here is the finished version with notes. I didn’t include a note on the top left pic as I felt like Digby wouldn’t know what to think about the fact that there were another people different from themselves. They are an upbeat character and I think facing that sight would leave them pondering and unable to form thoughts.

Here is the finished character page. It would be updated when Digby and the team first reach the hub room and settle down. I want the sketches to look like observational drawings, with some being candid and otto trying to sit still for Digby to draw and feeling awkward. : ) Hopefully I got some character and personality across. In the final game, there would be many more pages with more sketches throughout the course of the player’s journey. 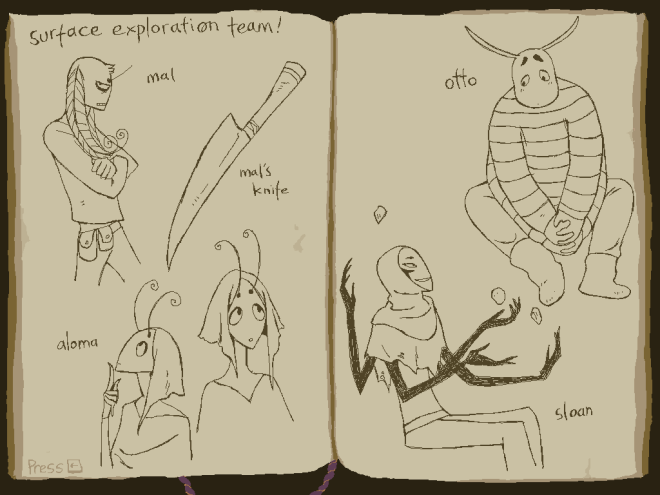